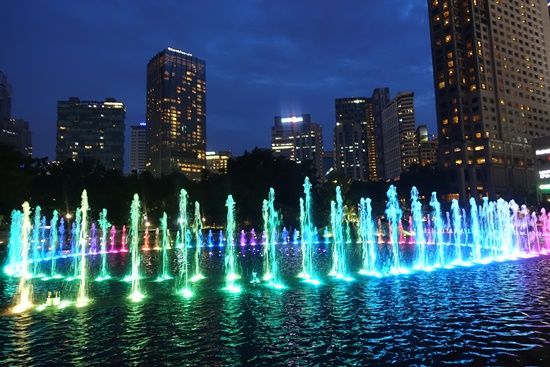 After two long overnight flights, we arrived in Kuala Lumpur rather delirious, but happy to be there. We grabbed the KLIA Express train after clearing customs and picking up our bags which took us to KL Sentral, the main train station. Our hotel, the Aloft KL Sentral, was actually accessible through walkways within this giant station/shopping mall. This was really convenient, especially after two nights sans sleep. 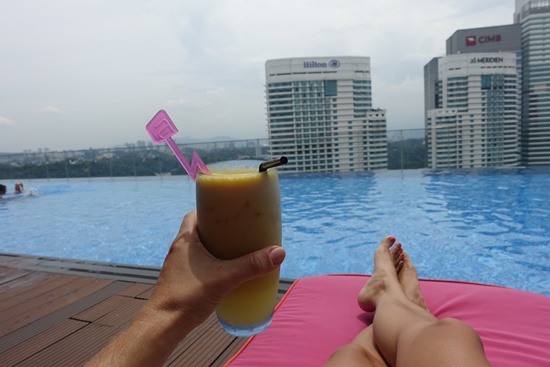 I typically pick a  nicer hotel to stay in at the beginning of my long Southeast Asia trips after the long flights over, thinking that after the massive journey I would be happy to rest and recover in a comfortable spot.

Although it sometimes puts me slightly over budget, once I arrive, I’m always so, so happy I did that. This time was no exception. The staff at the Aloft was super friendly and accommodating. They allowed us to head up to a 6th-floor room to nap (we arrived around 12:30 pm).

Later, upon waking up, they’d move us to a nicer, upgraded, upper floor room (which was being cleaned so we couldn’t go in at first). I was overjoyed to hear that one, we had a place to nap and two, we’d be upgraded! So we crashed hard for about four hours and then headed up to our new and more spacious room on the 28th floor, which did indeed have better views. This is one of the many times during our three-day stay in KL that I would be so happy to have picked the Aloft. I honestly can’t say enough nice things about it! Aloft properties in some spots are definitely more low-brow, but this one was fantastic.

We spent several different afternoons lounging at the rooftop pool, just two floors above our room. This was the second time I would be thrilled to be staying here, because wow. The rooftop infinity pool was simply amazing, with panoramic city views, sexy lounge music and just an all-around Lori-approved vibe. It felt much more like a W than an Aloft.

Upon entering on the first day, we realized it was about to storm, and so we enjoyed taking some photos and then headed back down to the room where I promptly fell asleep again. Finally, an hour later the rain had stopped and I had came back to life a bit. Although the jet lag was hitting hard, we headed to the night market in Chinatown. 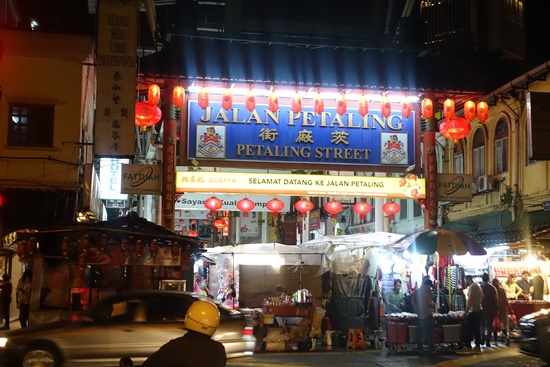 This is a good point to stop and explain a little bit about KL in general. As far as cities in Southeast Asia go, this may be my least favorite, as it seems extremely disjointed. There are several neighborhoods of the city I found more interesting than others, like KL Sentral/Little India (where we stayed), Chinatown and Bukit Bintang (near where the Petrona Towers are). The problem is that in between these areas it’s very odd, with just highways or industrial streets. It actually feels like several small cities sort of close to each other instead of one big city.

This made it annoying to get places, even though they do have a monorail transport system and we did walk and use Uber too. It’s also worth noting the city is not super pedestrian-friendly, which is something that is important to me in a large city. It was annoying to get around, there was just so much traffic.

So back to Chinatown. As far as night markets go, I’ve been to many in Asia, especially in Hong Kong, Taipei, Thailand, Cambodia, Vietnam and Laos and this just didn’t seem to have much of an ambiance. It was fine, though, we walked around, got some Chinese food (KL is also a big mix of Chinese, Indian and Malay) which was just average and went home to crash.

After sleeping 11 hours, we decided we needed to enjoy the beautiful pool for a bit, so we headed up to spend most of the day there, which was so wonderful. 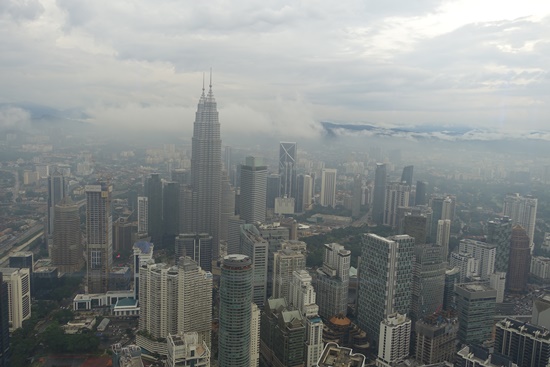 That evening, we headed over via Uber to the KL Tower to visit the observation deck and see the city, Petrona Towers included, from up above. 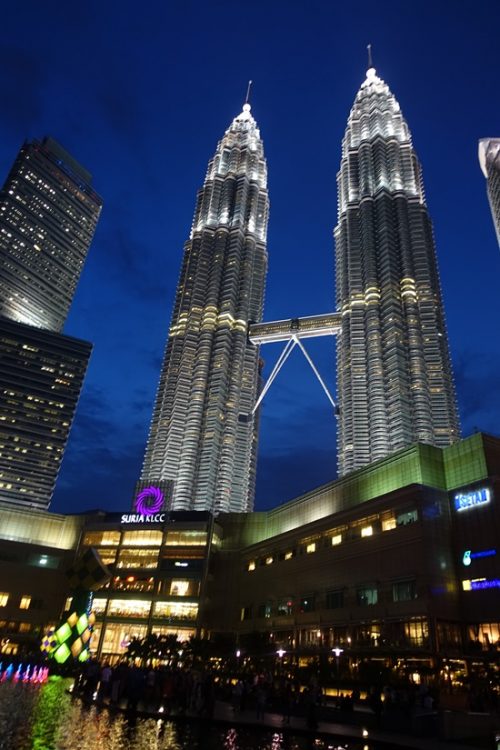 Then we walked over to the KL Towers and strolled through the active Bukit Bintang area where we searched for this restaurant I wanted to try, but never found. We ended up getting Lebanese food which was awesome, but I was really hoping to try some Malay food at this point, but we couldn’t seem to find the right spot. 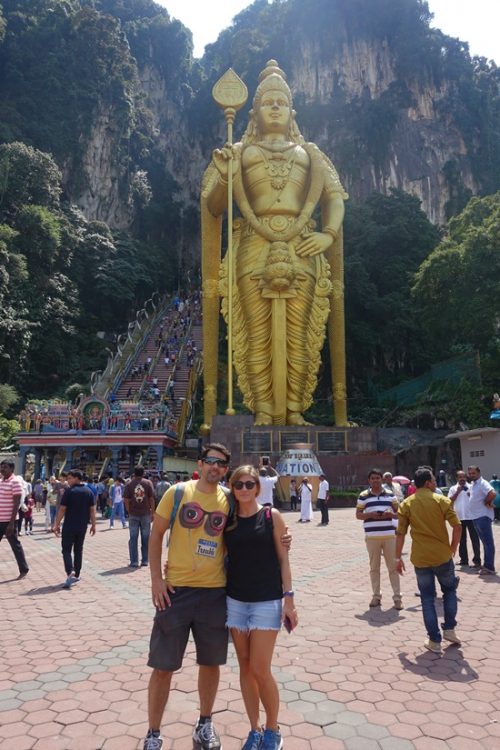 The next morning, we got up early to head out of the city and see the Batu Caves. The journey was super easy on the KL Komuter Trains. We were able to get there with no problems with just quick trip about 25 minutes outside the city.

Although it was super hot, these Hindu caves and temples dedicated to Indian God Lord Murugan dating back to 1890 were worth it. They were colorful and huge and quite unique, thanks to their many stairs and excess of annoying monkeys running around stealing peoples’ food — including ice cream cones. 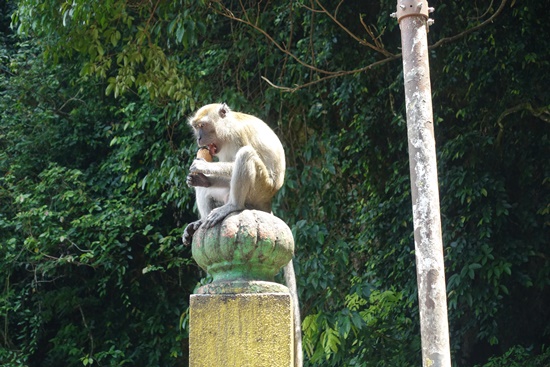 One of the temples had about 300 stairs to climb to get to the top, which of course we had to climb. In the heat and humidity of the day this felt like an extreme sport. It didn’t help that women needed to cover up, so I had topped my shorts and tank with pants and a t-shirt. It’s safe to say I had gotten a workout by the time we reached the top.

Despite the heat, this was one of the highlights of KL: one of the most unique temples I’ve ever seen (and I’ve seen a lot of temples). As I mentioned, KL has a bit of an awkward vibe, and so this cool cultural attraction really was a highlight for me in the midst of a bustling city that can’t seem to find it’s own personality. 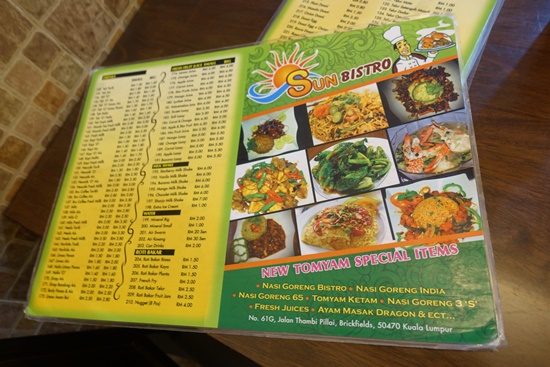 Once we arrived back in town, we hit the pool for a refreshing dip and then finally found a more local spot for dinner, but not before taking Jorge to Little India to get his head shaved at the barbershop for $2.

After this very affordable haircut, we found a cheap street vendor to make us some Nasi Goreng (fried rice) and roti (a type of buttery nan bread) which was fantastic. The guy spoke no English, so I ended up ordering the above somehow, plus some kind of green vegetable (similar to morning glory, a common vegetable eaten in Southeast Asia) with chicken which was covered in ginger and delicious. The whole meal cost about $3, so I was thrilled. After spending a lot more on other not-so-great meals and feeling like I was getting cheated for half the trip, a good $3 meal helped to put me back in the grandest of moods.

The next morning, we were headed out to Lombok and then onto the fabulous Gili Islands, which will be detailed out in my next post.

Compared to other large cities in Southeast Asia, KL is my least favorite. I think I’ll stick to Bangkok from now on for my jumping-off point. That being said, if you want to explore Malaysia or Indonesia, it is easily accessible and close to everything, so it can be a good place to start. If you do visit, I highly recommend the Aloft KL, and make sure to visit the Batu Caves.