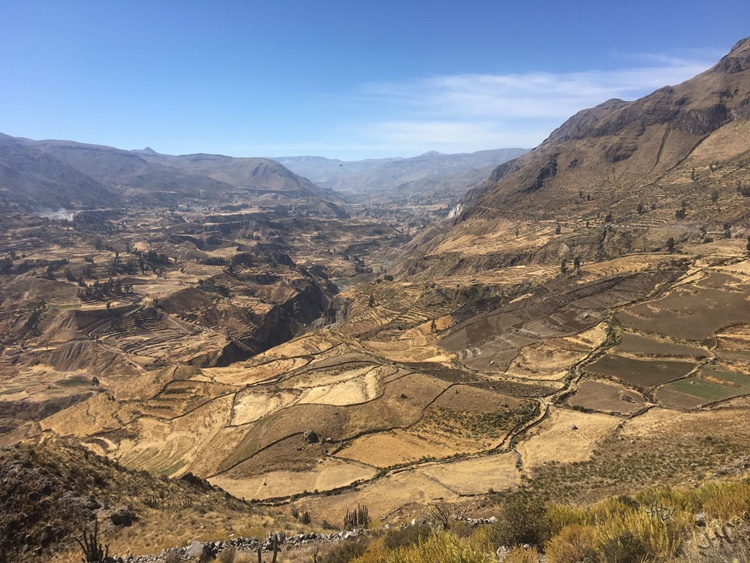 Over the past few years, I’ve had the opportunity to see some incredible places and the animals that inhabit them. I’ve trekked through the Borneo jungle to spot orangutans and visited elephant sanctuaries in Thailand. I’ve seen giant sea turtles and whale sharks in Indonesia snorkeling and stumbled upon some pretty nasty snakes, spiders and bugs in general.

Birds have never really been my thing, but when I heard about seeing condors (the largest flying birds in the Western Hemisphere) flapping their enormous wings around one of the world’s deepest canyons, that struck me as pretty impressive.

The Colca Canyon is 4,160 meters deep and there’s something that just seems sacred and special about it. It’s not surprising that certain Inca and Pre-Inka tribes worshiped condors in this Andean territory. Clearly, I needed to see what the fuss was all about.

I pondered the idea of a one-day tour where you wake up at 3:00 am to catch a bus and get to the canyon to spot the condors at dawn. This seemed just too rushed. I wanted to enjoy the Colca Valley and Canyon for a bit longer, so I chose to stay a few nights in a small village near the Cruz de Condor (the point where the condors hang out) called Yanque in a mountain lodge.

My tour left Arequipa, a town in Southern Peru at 8:00 am and made several stops along the way as we weaved our way into the mountains. I could tell the altitude was getting higher, and there was a point around 4,000 meters above sea level I really didn’t feel great — and neither did most of the other people on my bus. But I powered through.

I was able to see alpacas, sheep, cows and llamas wandering around and flamingos swimming in natural ponds and lakes.

When I got to Kilawasi Lodge around 2:00 pm, I was blown away by the gorgeous landscape.

Mountains covered with pre-Inca terraces surrounded me and the lodge was simple but lovely. My room had a small patio to admire the view and there were hammocks to relax in.

The pre-Inca terraces have several levels. Each level is used to plant something different, like potatoes, quinoa, wheat etc. When the Incas arrived, they continued to use the terraces for agriculture and they are still used for farming today, although not as much, thanks to the difficulty of transporting the goods and lack of rain/proper irrigation systems.

I was battling the altitude adjustment, though, which was no fun. I had to skip out on the first hike because I was dizzy and my head was throbbing. Sorochi pills (found at Peruvian pharmacies), a light lunch and a nap in the hammock helped.

The next morning I woke up early to visit some nearby villages on the way to the Cruz de Condor. We finally arrived at the viewpoint and my fingers were crossed. As always in nature, there was no guarantee we’d see any condors flying around. My worries stopped the moment I got there when I saw some perched on a rock.

They continued to fly around for about an hour, and what a show they put on. I learned that the younger condors are brown and the adults are black with white bellies or necks. A full-grown condor has a wingspan of 3.5 meters. They really are incredible — they fly so close to you— likely within 50 meters!

The beauty of the canyon, with its jagged edges and cracks, was just glorious. Photos can’t really do it justice of the condors flying around the bright blue sky and mountain tops, but I tried my best.

That afternoon, I enjoyed a mountain sunset via horseback, which was magical. It was also impressive to actually see erupting volcanoes!

After another night in the relaxing Killawasi Lodge, I was really to head on to my next adventure: Puno, Peru and Lake Titicaca.